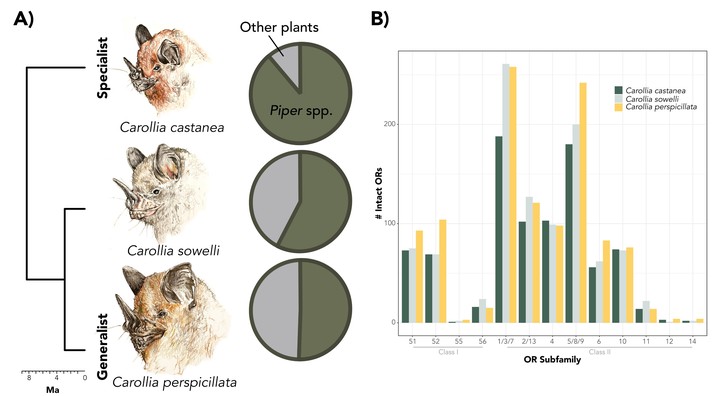 Mammalian olfactory receptors (ORs) are a diverse family of genes encoding proteins that directly interact with environmental chemical cues. ORs evolve via gene duplication in a birth-death fashion, neofunctionalizing and pseudogenizing over time. Olfaction is a primary sense used for food detection in plant-visiting bats, but the relationship between dietary specialization and OR repertoire diversity is unclear. Within neotropical Leaf-nosed bats (Phyllostomidae), many lineages are plant specialists, and some have a distinct OR repertoire compared to insectivorous species. Yet, whether specialization on particular plant genera is associated with the evolution of specialized OR repertoires with narrower diversity has never been tested. Using targeted sequence capture, we sequenced the OR repertoires of three sympatric species of short-tailed fruit bats (Carollia), which vary in their degree of specialization on the fruits of Piper plants. We characterized orthologous versus duplicated receptors among Carollia species, and explored the diversity and redundancy of the receptor gene repertoire. At the species level, the most dedicated Piper specialist, Carollia castanea, had lower OR diversity compared to the two generalists (C. sowelli, C. perspicillata), but we discovered a few unique sets of ORs within C. castanea with high redundancy of similar gene duplicates. These unique receptors potentially enable C. castanea to detect Piper fruit odorants better than its two congeners. Carollia perspicillata, the species with the most generalist diet, had a higher diversity of intact receptors, suggesting the ability to detect a wider range of odorant molecules. Variation among ORs may be a factor in the coexistence of these sympatric species, facilitating the exploitation of different plant resources. Our study sheds light on how gene duplication and changes in OR diversity may play a role in dietary adaptations and underlies patterns of ecological interactions between bats and plants.