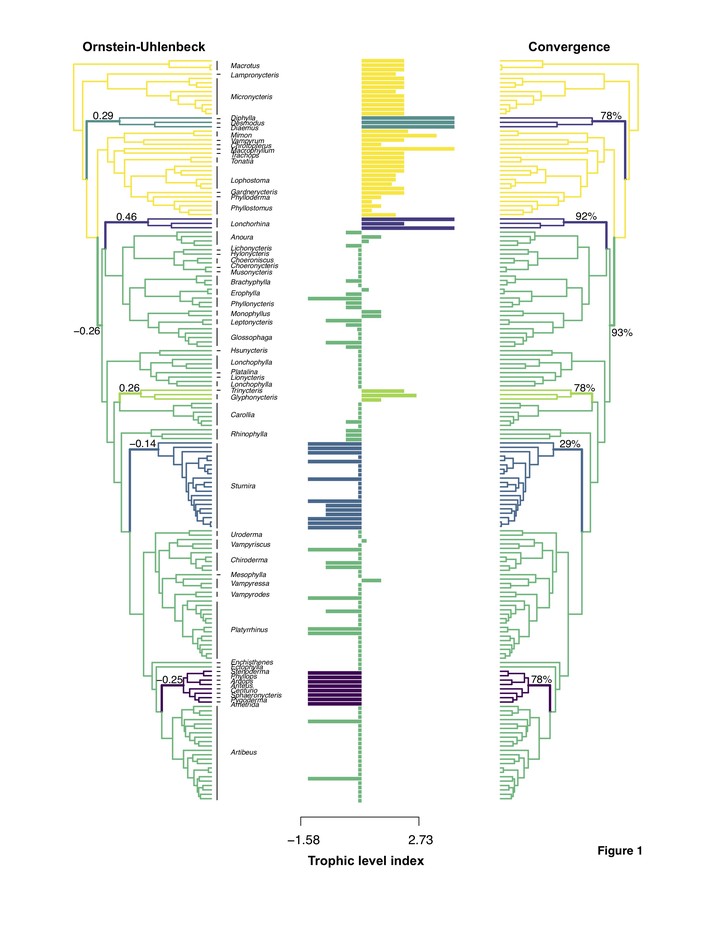 A diversity of cranial phenotypes and feeding ecologies characterizes phyllostomid bats. However, many subfamilies share a similar insect-feeding morphotype, apparently stable over millions of generations. Is the diversity of phyllostomid traits adaptive, and does it contribute to species diversity in the family? We evaluate predictions from Simpson’s ecological theory of adaptive radiation, applied to comparative trait analyses since 2000. The shift to higher rates of taxonomic diversification at the base of Stenodermatinae, new skull architecture capable of great bite force despite small size, and a distinctive olfactory receptor profile make this subfamily a radiation by itself. The stenodermatine skull architecture also enables making leaf tents, a new roost adaptive zone that contributes to the diversity of this subfamily. The evolution of distinct trophic adaptive zones characterized by optima in cranial musculature and mechanical advantage shows that stenodermatines are not the only phyllostomid lineage responding to ecological opportunities. Instead, nectarivores have unique cranial traits and occupy their own trophic adaptive zone, while a subset of insectivores together with sanguivores share a similarly high trophic level. There is also evidence of convergent and adaptive evolution in cranial traits associated with similar trophic levels, as well as adaptations coupled with dietary specialization in digestive and renal function. While linked to higher rates of taxonomic diversification only among stenodermatines, these various adaptations demonstrate the response of phenotypic form to diverse ecological function that makes phyllostomid bats unique.