Phylogeny and biogeography of Caribbean mammals 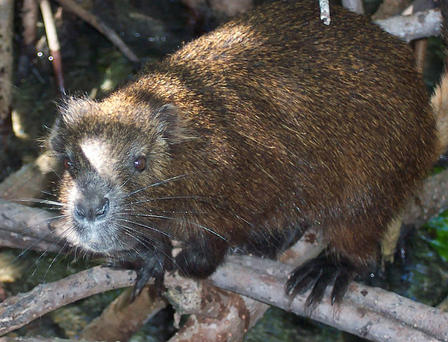 Vicariance and dispersal hypotheses have been proposed over the last two hundred years to explain the distribution, diversity, and faunal composition of the Caribbean biota. Despite great advances in understanding the geological history of the region, recent biogeographical reviews have not used historical biogeographical methods. In this paper I review the taxonomy, distribution and phylogeny of all Cenozoic Caribbean non-volant mammals and four bat lineages, and present reconciled trees for available phylogenies. Dates available from the fossil record and hypotheses of divergence based on molecular phylogenetic studies are also included in general assessments of fit between proposed geological models and Caribbean mammal diversification. The evidence posited in mammalian phylogenies does not add to the argument of dispersal vs. vicariance. One previously unidentified temporal pattern, the colonization of the Caribbean by South American mammals between the Palaeocene and the Middle Miocene, accounts for the distribution and phylogeny of the majority of lineages studied. Choloepodine and megalocnine sloths, hystricognath rodents, and primates all arrived during this window of colonization. Of these, megalocnine sloths, hystricognath rodents, Brachyphylla and allied bats, Stenodermatina bats, and primates fit the pattern of divergence from the mainland implied by the Gaarlandia hypothesis. Sloths, rodents and primates also roughly fit the timing of arrival to the Caribbean implied by Gaarlandia. The remaining taxa show contradictory dates of divergence according to molecular clock estimates, and no taxa fit the predicted timing and pattern of divergence among Antillean landmasses under the Gaarlandia model. Choloepodine sloths, murid rodents, insectivorans, mormoopids, and natalids show patterns of divergence from the mainland that are inconsistent with the Gaarlandia hypothesis and seem to require taxon-specific biogeographical explanations.