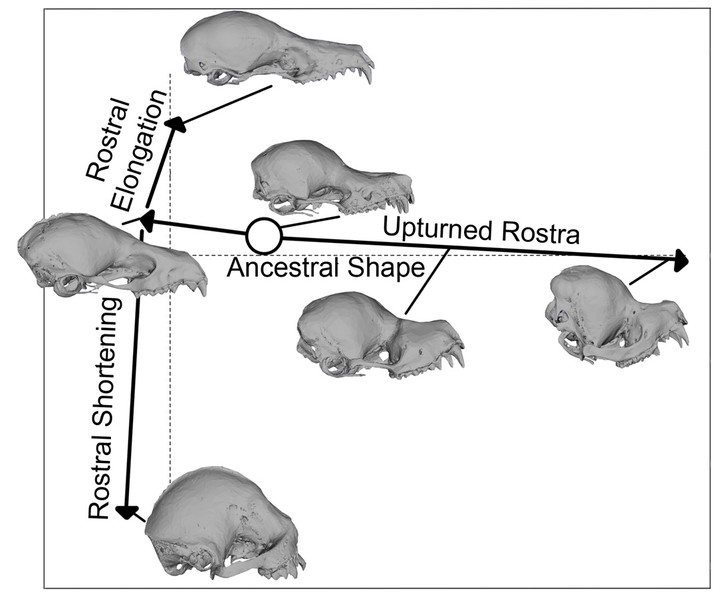 Image by B. Hedrick

Diversification and adaptive radiations are tied to evolvability, which in turn is linked to morphological integration. Tightly integrated structures typically evolve in unison, whereas loosely integrated structures evolve separately. Highly integrated structures are therefore thought to constrain evolutionary change by limiting morphological disparity. Mounting evidence suggests that high integration may facilitate evolutionary change along a single trajectory. We used geometric morphometrics to compare cranial disparity and integration among phyllostomid bats—which exhibit the greatest dietary diversity of any mammalian family— and their sister taxa within the superfamily Noctilionoidea. Our results reveal that phyllostomids are more tightly integrated and have less disparity in cranial shape than their outgroups, despite exhibiting tenfold higher species richness and significantly increased rates of speciation. Phyllostomid cranial morphology appears to have diverged from that of other noctilionoids by evolving along a single axis of morphological variation that describes the relative length of the rostrum. We propose that phyllostomids were able to evolve to occupy a wide range of dietary niches by varying rostrum length, possibly along a line of least evolutionary resistance. This study provides a compelling empirical example of how increased integration can lead to adaptation, implying that both high and low integration can underlie diverse phenotypes in adaptive radiation.