Forests, Coca, and Conflict: Grass Frontier Dynamics and Deforestation in the Amazon-Andes 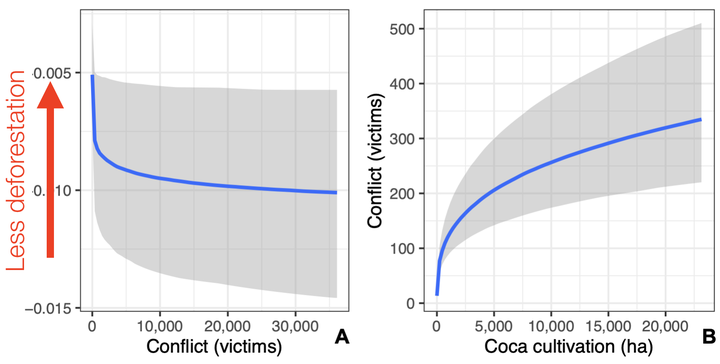 Population growth with weak economic development can promote tropical deforestation, but government infrastructure investment can also open new frontiers and thus increase deforestation. In the Andean region of South America, population growth has been a leading explanation for both deforestation and coca cultivation, but coca generates armed conflict and attracts counter-drug measures, obscuring the differences between population-driven and frontier-opening models of deforestation. Using a 15-year panel from Colombia, we model deforestation, coca cultivation, and conflict victims as interrelated responses with a suite of covariates encompassing land cover, land cover changes, population, population changes, counter-drug measures, and government infrastructure spending. Infrastructure spending suppresses coca, coca and eradication by aerial fumigation both increase conflict, and conflict promotes deforestation and is associated with depopulation. But the strongest predictor of deforestation is pasture growth, which covaries with coca. While these models show that infrastructure spending can help reduce coca, and coca’s influence on deforestation is indirect and mediated by conflict, the models also reveal the most important challenge to forest conservation is neither coca nor conflict, but an insatiable appetite for land that expresses itself through pasture growth.