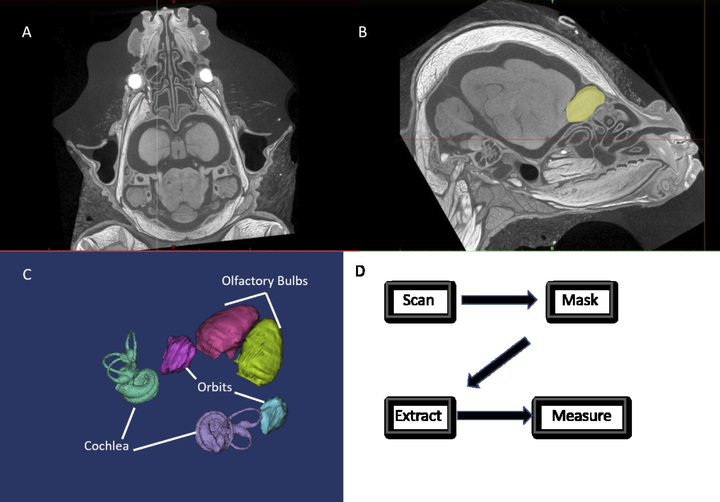 The role of mechanical morphologies in the exploitation of novel niche space is well characterized, however, the role of sensory structures in unlocking new niches is less clear. Here we investigate the relationship between the evolution of sensory structures and diet during the radiation of noctilionoid bats. With a broad range of foraging ecologies and a well- supported phylogeny, noctilionoids constitute an ideal group for studying this relationship. We used diffusible iodine-based contrast enhanced computed tomography (diceCT) scans of 44 noctilionoid species to analyze relationships between the relative volumes of three sensory structures (olfactory bulbs, orbits, and cochleae) and diet. We found a positive relationship between frugivory and both olfactory and orbit size. However, we also found a negative relationship between nectarivory and cochlea size. Ancestral state estimates suggest that larger orbits and olfactory bulbs were present in the common ancestor of family Phyllostomidae, but not in other noctilionoid. This constellation of traits indicates a shift toward omnivory at the base of Phyllostomidae, predating their radiation into an exceptionally broad range of dietary niches. This is consistent with a scenario in which changes in sensory systems associated with foraging and feeding set the stage for subsequent morphological modification and diversification.