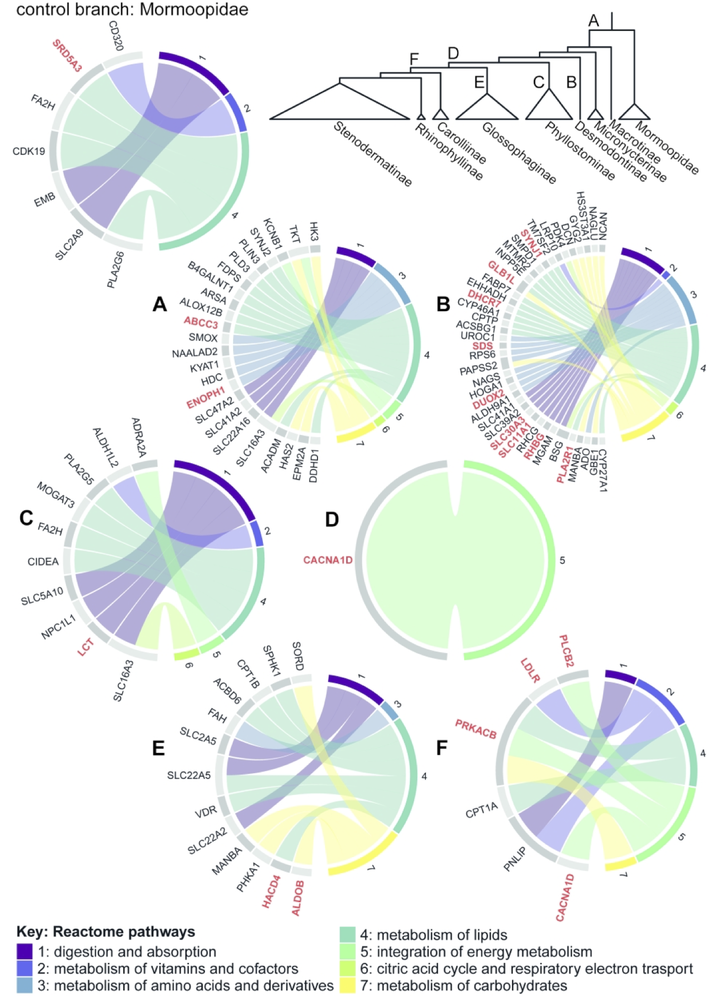 Dietary adaptation is a major feature of phenotypic and ecological diversification, yet the genetic basis of dietary shifts is poorly understood. Among mammals, Neotropical leaf-nosed bats (family Phyllostomidae) show unmatched diversity in diet; from a putative insectivorous ancestor, phyllostomids have radiated to specialize on diverse food sources, including blood, nectar, and fruit. To assess whether dietary diversification in this group was accompanied by molecular adaptations for changing metabolic demands, we sequenced 89 transcriptomes across 58 species, and combined these with published data to compare ∼13,000 protein coding genes across 66 species. We tested for positive selection on focal lineages, including those inferred to have undergone dietary shifts. Unexpectedly, we found a broad signature of positive selection in the ancestral phyllostomid branch, spanning genes implicated in the metabolism of all major macronutrients, yet few positively selected genes at the inferred switch to plantivory. Branches corresponding to blood- and nectar-based diets showed selection in loci underpinning nitrogenous waste excretion and glycolysis, respectively. Intriguingly, patterns of selection in metabolism genes were mirrored by those in loci implicated in craniofacial remodelling, a trait previously linked to phyllostomid dietary specialisation. Finally, using simulations, we show that the widely-used branch-site model is likely to be misspecified, with the implication that it is too conservative and probably under-reports true cases of positive selection. Our findings point to a complex picture of adaptive radiation, in which the evolution of new dietary specialisations has been facilitated by early adaptations combined with the generation of new genetic variation.