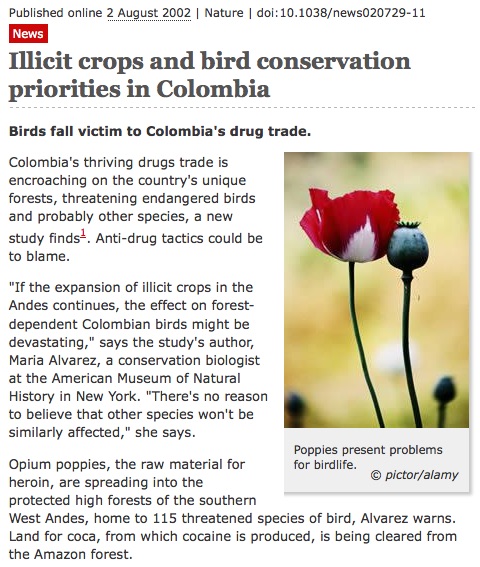 Over the last 5 years the amount of land in Colombia planted in illicit crops, such as coca and poppy, has grown an average of 21% per year and may account for half the total area deforested in 1998. I conducted a geographic analysis of the distribution of illicit crops relative to standing forests and areas of conservation priority for birds. Municipalities where illicit crops have been detected were overlaid on a forest‐cover map of Colombia and two types of conservation priorities for birds were plotted: distributions of threatened species and minimum‐area sets for conservation of all species. The sites of the highest conservation priority affected by illicit crops were in the southern Andes, the northern West Andes and adjacent Darién lowlands, the Sierra Nevada de Santa Marta, Serranía del Perijá, and the Serranía de San Lucas. The largest forested areas threatened by illicit crops were in Amazonia and the Amazonian foothills of the East Andes, sites of low conservation priority. Given current trends in the expansion of illicit crops and the narrow endemicity of some bird species, the conversion of forests for illicit‐crop cultivation may result in the extirpation of several bird species from affected regions. To impede this, those involved in illicit‐crop eradication and alternative development should give high priority to the protection of existing forest reserves and parks from the planting of illicit crops. Such efforts should also extend to areas proposed for conservation based on the diversity of threatened and endemic birds that are currently unprotected. The conservation of threatened and endemic birds in Colombian forests may hinge on successfully curbing incentives for deforestation, including the international trade in illicit drugs.