Geographical sampling bias and its implications for conservation priorities in Africa 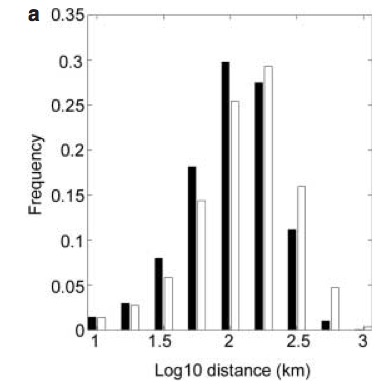 Aim To design and apply statistical tests for measuring sampling bias in the raw data used to the determine priority areas for conservation, and to discuss their impact on conservation analyses for the region. Location Sub‐Saharan Africa. Methods An extensive data set comprising 78,083 vouchered locality records for 1068 passerine birds in sub‐Saharan Africa has been assembled. Using geographical information systems, we designed and applied two tests to determine if sampling of these taxa was biased. First, we detected possible biases because of accessibility by measuring the proximity of each record to cities, rivers and roads. Second, we quantified the intensity of sampling of each species inside and surrounding proposed conservation priority areas and compared it with sampling intensity in non‐priority areas. We applied statistical tests to determine if the distribution of these sampling records deviated significantly from random distributions. Results The analyses show that the location and intensity of collecting have historically been heavily influenced by accessibility. Sampling localities show dense, significant aggregation around city limits, and along rivers and roads. When examining the collecting sites of each individual species, the pattern of sampling has been significantly concentrated within and immediately surrounding areas now designated as conservation priorities. Main conclusions Assessment of patterns of species richness and endemicity at the scale useful for establishing conservation priorities, below the continental level, undoubtedly reflects biases in taxonomic sampling. This is especially problematic for priorities established using the criterion of complementarity because the estimated spatial costs of this approach are highly sensitive to sampling artefacts. Hence such conservation priorities should be interpreted with caution proportional to the bias found. We argue that conservation priority setting analyses require (1) statistical tests to detect these biases, and (2) data treatment to reflect species distribution rather than patterns of collecting effort.