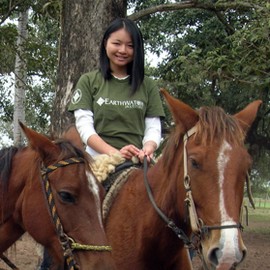 I have long been intrigued by the effects of environmental changes on the evolution of tropical and marine animals. At my home in Southern California, I am a senior at Walnut High School and have conducted research for four years in the Valdés Lab on the population structure of several nudibranch species.As an Earthwatch Institute fellow in summer 2009, I trekked through the Brazilian Pantanal, the world’s largest freshwater wetland, studying how anthropogenic effects influence populations of fruit bats. That field research experience gave me a passion for the winged mammals, and I have been able to fuel this enthusiasm by interning at the Dávalos Lab as a Simons Fellow. Through molecular, morphological, and echolocation analyses of Caribbean island populations of the mustached bat Pteronotus parnellii, I have provided support for an incipient speciation event between two islands. My enriching experiences in the Dávalos Lab have confirmed my interests in evolutionary biology and I hope to pursue a career in conservation genetics research.